Even the day of rest is full of excitement around here

Not much has happened around here, this morning I was trying to sleep in and Matt bust in the room at 6:52- "mom a rabbit done broke out!! I need the staples and the gun!!"

So, needless to say, I was awake. I handed him the staples and the staple gun, then I went and turned on my coffee. Once it was done I went down to the pen. The rabbit was back in. Come to find out, BR had went to double check on Matts feedin and waterin before he went to work (thankfully he was runnin late), and one of the does we just bought for WAY more money than I ever wanted to spend,(it couldnt be the $10.00 buck... of course not...) was runnin around the cage sideways. Not listing, she was actually running on the upright wire, the 4 sides, feet never touching the bottom... Like one of them circus acts where they ride their motorcycles in the cage and go upside down and all in a circle. Well, it seems she was runnin the sides of the cages, and even though we had put a staple every 2 to 3 inches, on 1/2 inch square hardware cloth (meanin the wire is set so it makes 1/2 inch squares), she was able to pull them out and plopped down on the ground. By then Brett was out there in addition to Matt and BR said they just stood there.

The same boys who willingly catch and carry a nasty vulture over 3 acres just to bring it home.

The same ones who catch cardinals and bluejays and everything else, and bring them in the house.

The same ones who will catch a lizard in mid air, bring home snakes so I can tell them IF they are poisonious or not, the same ones who have no qualms about spending hours trying to catch an armidillo, or possum.

who set traps for spiders and let scorpions crawl on them.

They just stood there like a deer in the headlights. You'da thought the dadgum thing had rabies or somethin. BR finally got them to move, right about the time it went behind a tree, not 8 inches from the hog pen which runs alongside the tree.

Now if fluffy bunny would have gotten into that hog pen, she would have been a tender 10 lb meal for them hogs. there wouldnt be no savin' her.

There have been more stupid chickens loose their life in that hog pen than in a KFC plant.

Anyway, Finally the boys got in front of her and BR picked her up. he threw her back in and went to stapilin every single inch. up, down, top and bottom. This cage only had 3 rabbits in it at the time. But its an 8 hole, 10 foot long 4 foot wide hutch.

We hadnt put doors in it yet. The three that were in there were put in before we put the roof on. Since they are watered from the outside and their feeders stick through the wire you dont need to get in or anything.

We were trying to fiqure out where we wanted to put the doors, what we wanted to make them out of, if they should swing up, or down, or to the side. I reckon its a good thing that we hadnt cut doors, any weak spot would have let her out much quicker.

This left us just enough time to get ready for church. Then I had to run all over time lookin for fence staples, we are gonna make this into a fortress, no more kamakazie rabbits.

My dad texted me today, he is due in on Wend for Bow's birthday party on saturday. He inquired about that silly little ball of wind in the gulf. I told him to come on, wasnt no stupid ole huricanne gonna screw up our week. Finally after a promise of a case of beer and no harm coming to him he relented. LOL

Of course, then I got to thinkin about it. I have all these rabbits, and alot of money invested in them, between gas drivin all over hells half acre to find them, buying them, building the cages, and buying all the crap they need, then I have hogs that were just bred,and of course all the time, money, and crap they need, not to mention almost a years worth of food, building pens and fences and lean-tos and various other crap, and all the high dollar chickens they have eaten---

AND I have the chicken coop, where each egg I get is costing me about 5.00 till I pay off the coop, wire and feed, buying the original chicks (of which I have 5 or so left... Thank GOD for my incubator....), and all these roosters I feed cause we havent had time to butcher them.

Plus my horses, who did get out last week cause my grandfather didnt double latch the gate and Tapper can open anything, luckily the sherrif was able to get them back in. I didnt even know they got out till my grandfather saw hoofprints everywhere and found the card the man had left in the properly tied gate.

anyway, I got to thinkin, with all that, then yep- IDA might just make a right turn and come see me. I'm tryin to decide how to convince which ever family member we stay with that I really DO need to bring 4 hogs, 6 rabbits and a dog to their house so they are safe... LOL

As I mentioned in the last post; I have a friend that loves to hunt, and her birthday fell on opening morning, so all week I have worked on her cake. Poor thing she was on the deer stand before daylight opening morning and stayed all day, but the only deer she saw got ran off by a dog. and it was the biggest she's ever seen she said.

Then a few hours later she was sitting there, quiet as a mouse, and a squirrel tried to get into her stand. She says it scared the daylights out of her.

I jumped up right then and tried to make a squirrel. I aint the best sculpter in the world but I put it on there anyway.


so here is the cake.
everything except the deer and the poles are edible. the deerstand is a cake in its own right, covered in fondant. 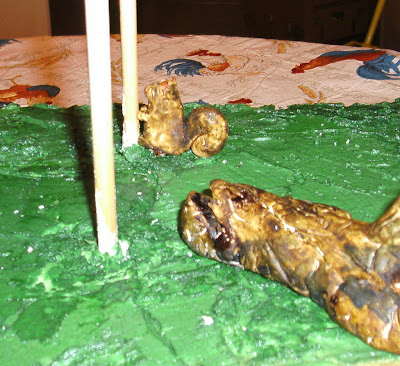 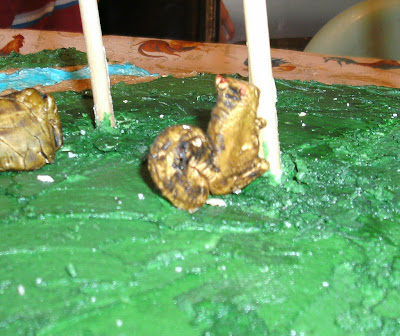 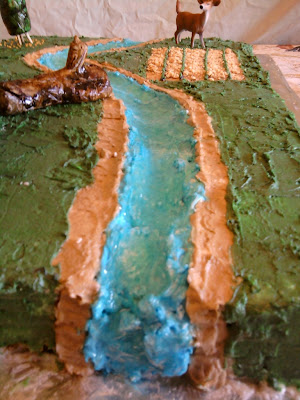 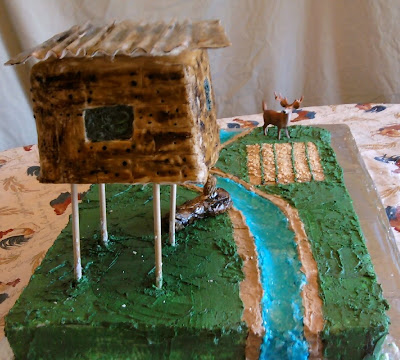 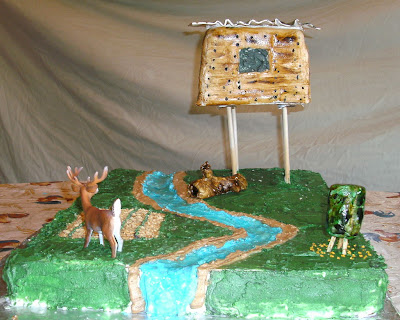 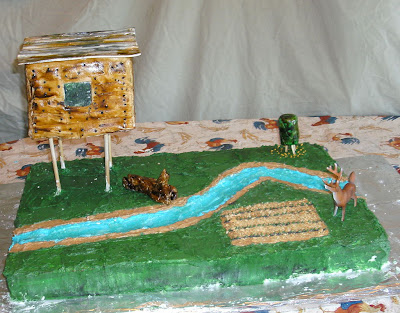 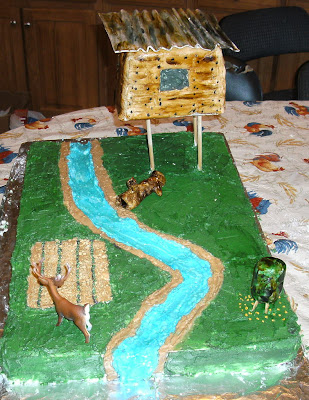 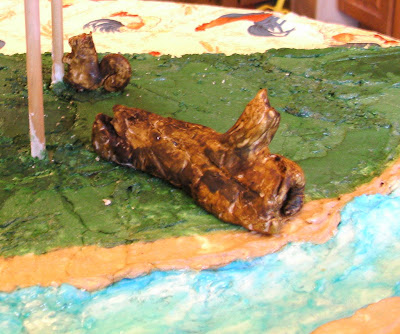 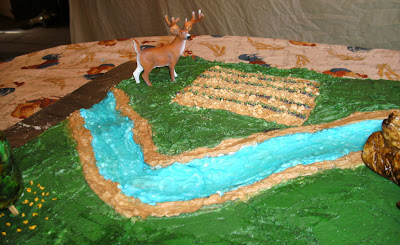 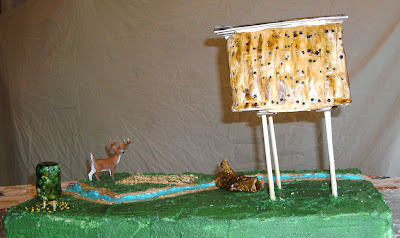 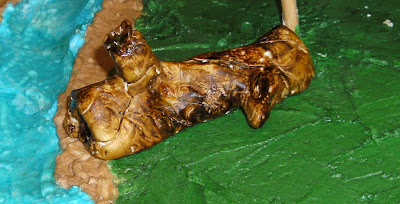 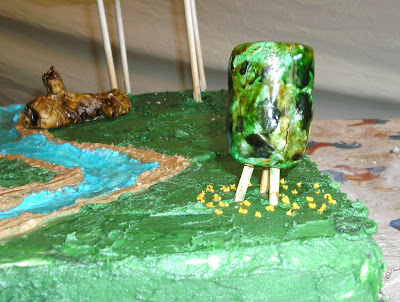