Good news, Bad news and the pictures to prove it!

Howdy folks :)
We had a busy week and weekend. The drama I spoke about last week is still ongoing. It will get worse before it gets better. But I am starting to look forward to its conclusion. I spent quite a few days working on that. And then I had to drive to Lufkin one day to get Bow's costume. I found one that was supposed to be larger. Unfortunatly it is the same size. But I will squeeze his little fat self into it.

I also picked up BR's birthday present. I got him a game camera. We went out and set it up yesterday, before his siblings came over.

of course my mother in law picked up the cake for me. And had them write Happy Birthday. Of course it came in saying "Happy Birthday Lisa, BR, Luke and Toby". Why did she need to put Toby on there? he is the baby, I understand that, but at 25 I am quite sure he would understand his birthday is in August and NOT October. and wouldnt feel left out. Notice an actual child left off? I was SOOOO pissed.

Anyway, BR and I had cooked all day, Brisket and pork rib things and tater salad, the whole nine yards. Toby and Suzie decided to go to Houston instead, and Luke and Amanda just didnt show up. Lisa and Gavin did come, as did Elray and Martha, plus my mom. It wasnt anything fancy, we do this a few times a year. But I am already tired of eating brisket and tater salad. LOL

Today was just a lazy day. BR and I watched the cowboys on TV. Not sure what in the hell they are doing. But they got my blood pressure up and going. and I moved a computer over to hubby's lazyboy. I hid the tower and gave him a wireless mouse and a TV tray to put the flat screen monitor on. That way he can hide it when he is done. A friend called when I was doing it and I told her it was so that I could show BR how to bring up the pictures from the SD card that goes in his game camera, I wanted to make it easy on him, he always gets mad cause when he gets on my computer he cant ever find a window to use, or says I have too many open, or what ever. THis is just easier for him. He heard me telling her and said "tell it like it is, you just really dont want me screwing up YOUR computer". Its nice when he understands. :)

Bow has spent the day walking all over, and spent last night and yesterday eating dirt and sticks and rocks. He LOVES being outside. the tastes, the smells and the dirt under his fingers. Plus getting to be pushed around on the kids old riding toys.

We built a fire and sat around and visited for a while. Its sad when you get so old that this is your enjoyment for the year! LOL

Anyway, BR went and checked his game camera this morning, bringin me the card. I showed him how to bring up the pics and other than the 9 of me (gosh I look old in close ups...) fixing it and tying it to the tree, plus walking around seeing where you set it off, there were about 10 of these. 2 of the eyes at 7:48 pm 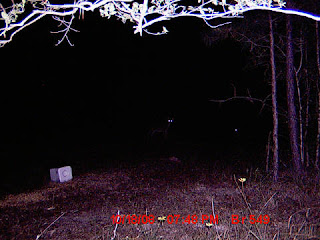 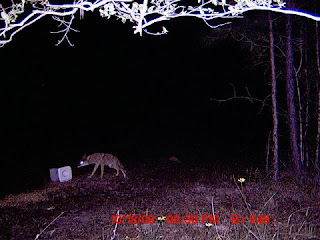 I am SOOOO ticked off. When we went to put it down there there was deer tracks everywhere. big ones, little ones, does, fawns and bucks. This is RIGHT behind the house. it takes less than 4 minutes to walk down there.

But after BR set the pics up as the screen saver on his puter and stared at it for a few hours, he called me over. and had me 'REALLY -- REALLY' look at the eyes pics. this is what we saw. 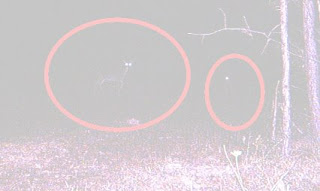 So, I am sorta happy. My first thoughts are still that the damn coyote has to GO. I DONT like them near here. I dont know where the pack is. It was about this time last year (matter of fact, it was EXACTLY this time last year now that I think of it) that they were RIGHT in my yard. right behind my burn barrel, which is about 15 feet from my door. Attacking my dog. BR said he would have a hard time killing it. They are not easy. I dont care. I want it and any friends it has GONE. We cant trap it, either live trap or death trap. My idiot female dog will get in the trap. or my old dog. I have to fiqure out something though. We will see what the next few nights bring. If it comes down to it, I will start sitting out there and waiting for it. I'd rather meet it on my terms than have to run out and try to hold a gun, a flash light (at 9 months pregnant I might add) and hear the awful cackiling they do when they are attacking and hunting my dogs. That is the MOST erie sound, I still get chills thinking about it. My mother and father in law have one that comes right up in their yard. I am so scared that one day it will get one of their dogs, or my pig. He is still over there.

anyway, this is what has happend here this week. Other than PTA stuff and a marathon cleaning session for the BBQ we havent done much. Now that I have the laundry done (the boys told me at 8:40, AFTER they had been in bed for 20 minutes) that they needed jeans for tomorrow... I could have killed them!

I'll keep you posted on my coyote issue.
Posted by maidto5 at 10:22 PM