'Plecia nearctica' must mean Pain in the ass in latin

I wasnt going to blog until tonight.
But I just went outside to tell BR bye and take out the trash. And I got swarmed. I swear, if love bugs (they have other names too, telephone bugs, *explitive* bugs and their latin name Plecia nearctica)
were dangerous, or bit it would be an epidemic. they would have the goverment down here trying to get rid of them.

You can say "the skeeters are everywhere" or "I was swarmed by flys" But honestly, you dont know what swarmed is, until you literly cant breathe for fear of sucking one down your throat. If you swing your arm in front of your face you kill at least 20. I am NOT exagerating. These things are awful. And they just get worse every year.

They are not like anything you have ever seen, there is no fear or avoidence. There is just absolute coverage. They get all over you. They are on everything you touch. And they smush SOOO easily, there is no picking them up and throwing them out. If you touch one you have smushed it on you. And they STINK. I cant desribe the smell. But it perments everything around you. If you turn on the AC in the truck its all you can smell.
They die on anything and everything and 'cook' in the heat.
And they only live 2-3 days, so all of them that get in to the house die. and they are EVERYWHERE. Bow tries to eat them. The cat eats them. Its nasty.

Now, you might say "2-3 days, just deal with it", NO ONE lives 2-3 days. they are out for weeks on end. about 6 weeks to be exact. Twice a year. EVERY year. Spring and late summer.

I drove 16 miles yesterday. 8 to BR's job and 8 back. and my truck was covered. By the time I got to the yard I couldnt see the road. I had to clean my windshield before I could attempt to drive home.

Here are some pictures of the front of my truck after just a 16 mile trip, and we had washed some off. 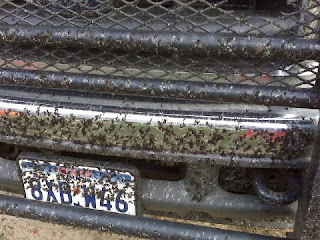 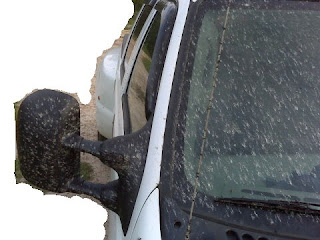 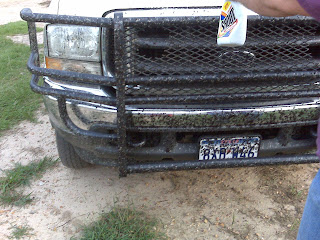 and you cant just spray them off. you have to scrub them off. I had to wash my truck last night just so I could see out the windshield the next time I go to town. I took these pictures before and after. Did you notice my antenna? something that little and it is absolutly covered. 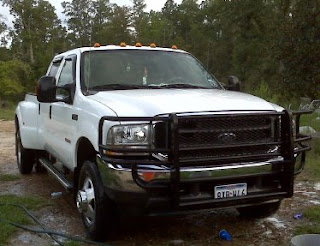 And I hate to wash my truck. BR sees every little scratch and ding, and gripes the whole time.


I couldnt clean out the inside, because during lovebug season you have to race out the door, race into the truck and slam the door as quickly as possible to cut down on the amount that get in with you. They land on you and crawl. and although they are not dangerous, (unless you breathe enough in and literly drown), it IS dangerous to be driving 70 miles an hour and feel something crawling on you and get freaked out.

I walked out on the porch to take a picture of one and when I came back in about 35 seconds later, Rayley picked 17 out of my hair. I was NOT out there but a few seconds. I had no desire to be out there. Upon reflection, I can see NOTHING that would be needed to be done so badly as for me to subject myself to these vile creatures. 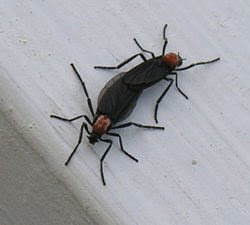 I Decided to steal this picture off the net. I did go out to take a pic, but they swarmed my camera and I couldnt get them OFF the lens long enough to get a picture. Plus I smushed some while I was trying to push the picture takin button.
These bugs are not native to here. They came in on a ship from somewhere. Just like fireants did. If you drive 75 miles north of here you dont have them anymore. I know that most of the gulf coast is covered in them. But this is the worst season in a long time. They thrive on wet ground litter. eating and laying eggs in the decaying leaves and such.

AND I have not seen a use for them. Honestly, there is NO USE. they are just a worthless, nasty, miserable little bug. I really feel sorry for anyone working outside during lovebug season. They thrive around anything white. Heat draws them (machines and such running), and there is NOTHIN to use to get rid of them.

I have read all about them, they have no actual use, They say they pollinate flowers. WEll, all our flowers got pollinated WELL before the 1940's when they first appeared in Galveston.

They are more of a danger than a benificial insect. Not to mention they are destructive. Just a few days of them being dead on your car and their decomposing bodies eat the paint off. ANd Destroy the chrome. When they get hit and end up on the radiator they clog it up and will cause your car to overheat. OR if you go daily to the carwash to clean them off you will end up bending the delicate fins on your radiator and having to buy a new one.

As we were driving yesterday I was hitting them so often and with such quick sessesion that it honestly sounded like it was raining.

Even when we have June bugs its not this bad. Granted, they are bigger, and when they splatter they make a bigger mess on the windshield, but they are not as numerous.

And the old joke "what was the last thing that went through that bugs mind when it hit the windshield?" (their butt) doesnt even give you a grin during lovebug season. Plus, you know they are just arguing. Its the male and the female connected together. So thats why they just flit around with no real purpose in life. They constantly argue.